IB ACIO Answer Key solved Question Paper
1 curcuma longa is the scientific name of which spice?
2 Bones found in the hands and feet as the percentage of total number of bones in the body of an adult human being is nearly equal to?
3 Europeans are believed to have brought potatoes to india in the 18th century. Which region of the
world is believed to be the origin of potato cultivation?
4 Oymyakon Is generally considered the coldest inhabited area on earth. Which country oymyakon is located in? 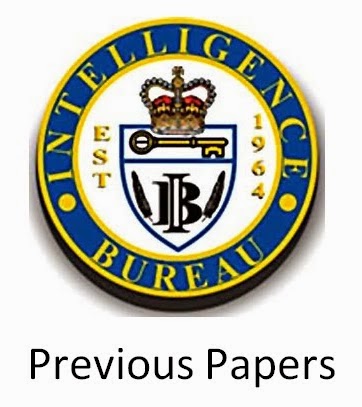 5 Which gland in the human body is also known as the third eye?
6 Leukaemia is a group of cancers that usually begins in the bone marrow and results high numbers of which abnormal cells?
7 During an earthquake,two places A and B record its intensity on richter scale as 4.0 and 6.0, respectively. In absolute terms, the ratio of intensity of the earthquake at A to that of B is?
8 On a cold day in January, the temperature at a place fell below the freezing point and was recorded as -40degree centigrade. On Fahrenheit scale, the same temperature would?
9 Universal gas constant,R, is a property of?
10 In which place was the 1st science congress held in January,1914?
11 To which places Aryabhata, the great  mathematician, went for advanced studies?
12 The development of the world ,s first practical design for an inter – continental Ballistic Missile, A9/10, was undertaken in Nazi germany during the world war 11. It was intended for use in boming?
13 Homi Jahangir Bhabha, the father of Indian nuclear programme, was also the fiunding director of which of the following institutes?
14 Who headed the satellite launch vehicle (SLV) project launched by isro in 1970?
15 Where was Bhaskara, also known as Bhaskaracharya or Bhaskara-11, an Indian mathematician and astronomer, was born?
16 The BrahMos, a short range supersonic cruise missile, is a joint venture between which foreign country and Indian agency?